How To Breathe While Singing

If you’ve ever taken voice lessons, one of the first things you might have learned about is breathing technique. But what If told you that it’s possible that everything you might have learned about breathing technique up until now is wrong? In today’s article, I’m going to tell you how breathing actually works and show you how to breathe while singing in order to make your voice stronger.

Now I’ve watched a lot of videos from vocal coaches on YouTube and Instagram where they talk about how to breathe while singing or projecting the voice. Most of them talk specifically about using the diaphragm to control vocal loudness. Being a vocal coach myself, it’s absolutely not my intention to knock the advice of other vocal coaches, but as a fitness trainer, this advice makes my head explode, because it shows a fundamental lack of knowledge of how breathing really works.

So today I want to quickly explain to you what the diaphragm actually does, talk about the muscles of the body that are responsible for voice production, and give you some tips on how you can train those muscles in order to make your voice more stable and therefore more powerful. Make sure you watch the video until the end to ensure that you get all the info you need to help you step up your vocal game. So, Let’s get to it!

What is the diaphragm? 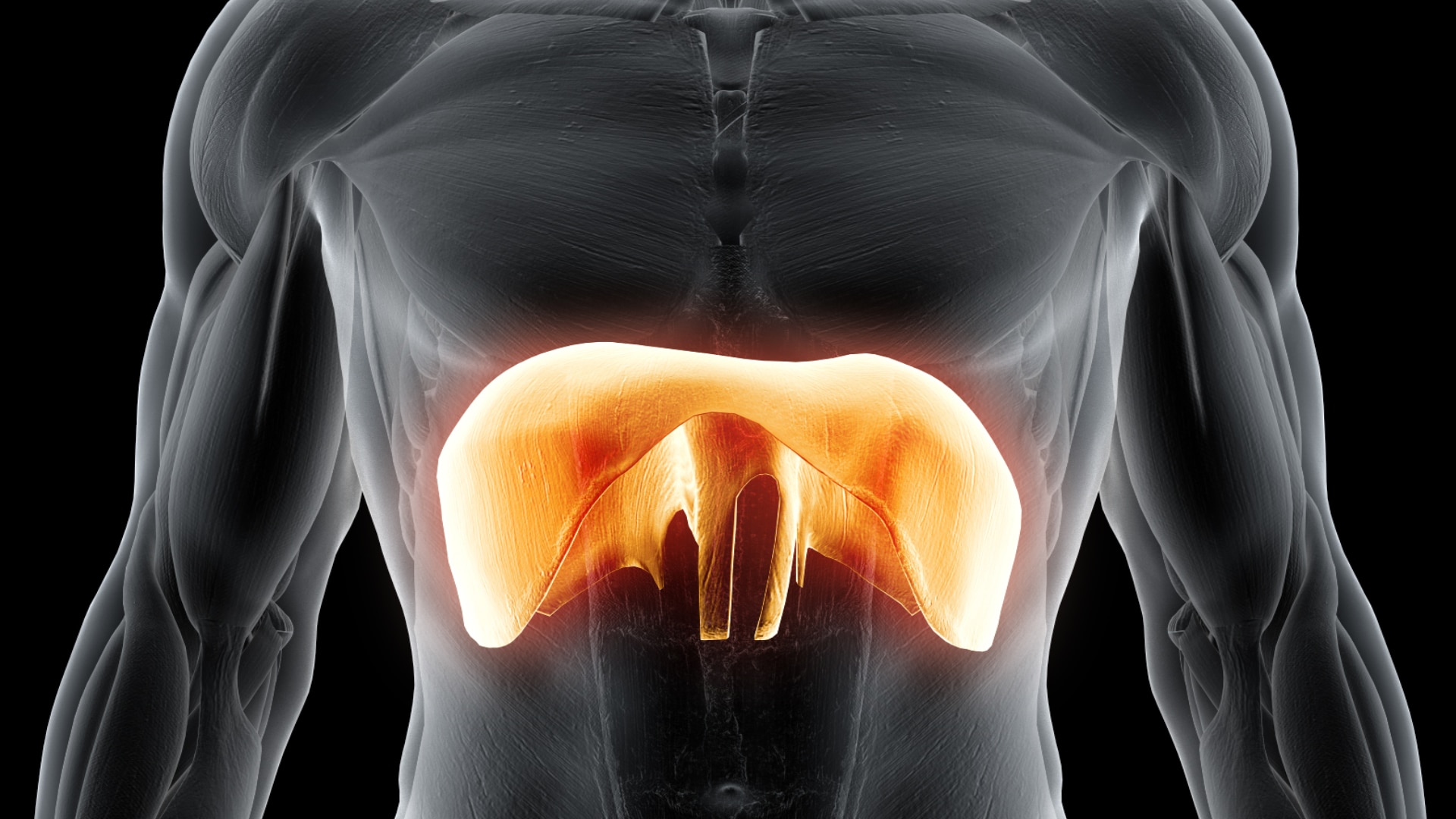 The biggest misconception in vocal coaching circles is the role of the diaphragm when it comes to breathing, speaking, singing, or other forms of vocal projection. The thing is: your diaphragm does play a very important role in sound production, just not the role that you may have been taught. Your diaphragm has only one job: to aid in inhalation, or breathing in. That’s it. Really! So let’s go into some detail.

The diaphragm is a muscle that stretches between the chest and the abdomen, directly underneath your lungs (show graphic). When relaxed, it looks like an open parachute. When this muscle contracts, It becomes flatter and moves downward.

When the diaphragm moves down, which is what happens when you breathe in, the amount of space in your chest cavity is increased, and air flows into the lungs. At the same time, the inner organs in the abdomen are pushed down. As a result, the abdominal wall (this area here) moves forward as well as outward on the side.

When you breathe out, the diaphragm relaxes, and other muscles contract to push the air out of your lungs and upward through your larynx, where your vocal folds are located. The vibration of the vocal folds is basically how sound is produced. I’m going to release another video very soon where I talk about exactly how the vocal folds produce sound, so make sure to subscribe to my channel and click the notification bell so that you’ll know when the video is out.

Now you’re probably saying, „Well, I’ve been taught that the diaphragm pushes the air out of my lungs!“ Well, if you don’t learn anything else from this article, please memorize these three words: „Muscles. Don’t. Push.“ When a muscle contracts, that means it pulls together. When it relaxes, it generates no force, so it doesn’t actively move anything.

A good example of this is using your arm to open and close a door. When you open the door, your bicep contracts, or comes together, and you pull the door open. But when you close the door, your tricep – the muscle on the back of your arm – and front shoulder muscles contract, which extend the elbow in the movement we know as pushing. Your bicep relaxes and therefore doesn’t do anything.

When your diaphragm relaxes, which is what happens when you breath out, it quite literally does nothing. So let’s take a closer look at the muscles that are responsible for breathing out: the intercostal muscles and the core muscles.

The role of the core muscles

Breathing out while totally relaxed is mostly a passive thing because the movement of the diaphragm and the intercostals is automatic. However, breathing out can also be performed actively when the inner intercostals and the core muscles contract. Now, what are the core muscles? They are basically all of the muscles that make up your midsection and they include your abdominal muscles, the obliques, the transverse abdominis which are underneath the obliques, as well as the lat muscles, the QL muscles which connect the upper and lower half of your body, and various other muscles in your back.

These muscles are not only responsible for the protection and stability of your spine and maintaining your posture, but also play a vital role in breathing, specifically in breathing out. You can actively use these muscles to control how much air you release when you speak or sing. That bulge that you might see when you breathe in is not air entering your belly; it’s simply your diaphragm moving your organs out of the way when it contracts. No air actually goes into your belly! Doing things like holding your breath or slowly releasing air while you sing or speak are the result of your rib muscles (the intercostals) and your core muscles working together. Your diaphragm has nothing to do with that process.

In the meantime, here are a couple of exercises you can try right now to better understand how this all works.

Now blow out all of the air in your lungs as hard as you can, for as long as you can. You should feel your abs, sides and back start to tense up a little. That’s perfectly normal; that’s your core muscles actively helping your rib muscles empty out your lungs. Your diaphragm is not involved.

There’s another exercise that you can do to activate your core muscles that’s one of my all-time favorite training techniques that’s not a traditional vocal exercise, and that’s gonna be the topic of my next tip article. I’m all about helping people like you get stronger, healthier voices and bodies, so if you’re looking for a program that incorporates all of the vocal and fitness tips that I give you on this channel, please check out my VOXXBODY workout.

This site uses Akismet to reduce spam. Learn how your comment data is processed.